In contrast, a similar experiment in Python 2.7.8 finished in merely 4 seconds:

My first instinct was to parallelize the grep operation, but that didn’t help:

Surprised, I retreated back to a simple loop over the entire length of the file:

Inconceivably, it hung again! So I now suspected that something might be wrong with that log file itself. Paging through it, I discovered an enormous sequence of NUL bytes embalmed several thousand lines deep. That was unexpected, but why should NUL bytes only affect Elixir and not Python? Were C programs immune too?

Perhaps excessive line lengths also paralyzed Elixir? To verify, I wrote my own file reader that would lazily read a single 128 KiB (32 filesystem blocks, commonly sized to be 4 KiB) sized chunk at a time and then split it into lines:

How do I optimize this further? Well, I would imagine that Elixir already uses a similar (in spirit) line splitting algorithm that is already heavily optimized, so eliminating my own would be ideal (deleted code is debugged code). In addition, I also have control over the sizing of chunks I read from the file.

Following this intuition, I searched the web and unearthed two disparate hints:

Although this performance still pales in comparison to Python’s 4 seconds, it’s a reasonable trade-off considering the concurrency and fault-tolerance merits of Elixir over Python. Furthermore, this subpar performance might be a remnant of the underlying algorithms being used to fill buffers and split lines inside Elixir, given the similarity in execution time with wc when counting characters.

Read large files as raw binary streams (not as UTF-8) along with enough caching:

This article has been superseded by Elixir’s Flow and GenStage libraries: 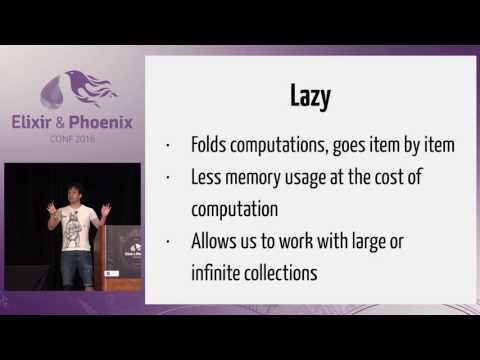