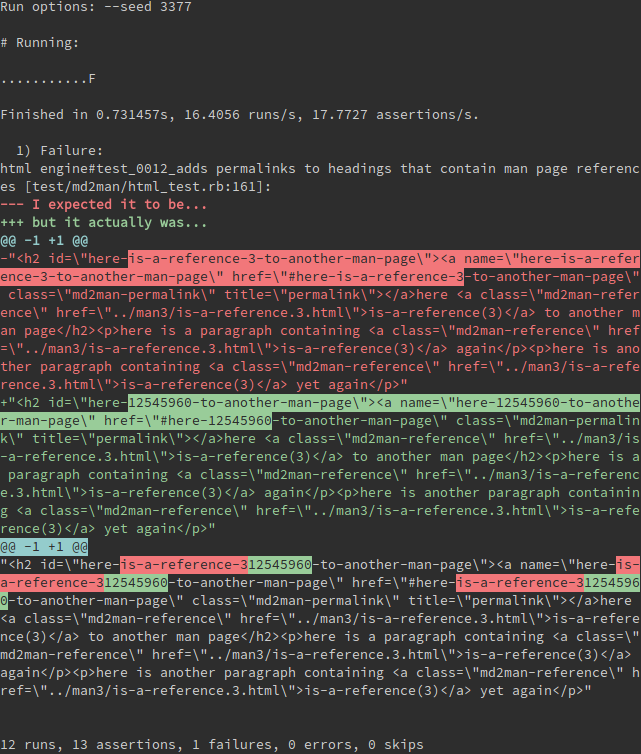 After a long day of practicing test driven development in Ruby, I grew weary of mentally parsing the colorless diffs that MiniTest displays when assert_equal fails: 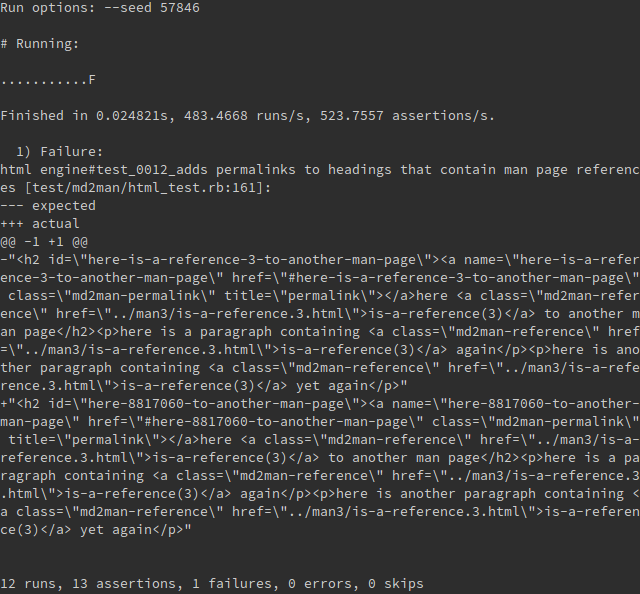 I dove into the MiniTest codebase using ack, hoping to find some way to pipe its diff output into colordiff during display, and discovered that MiniTest already shells out to diff(1) to produce its diff output.

In fact, MiniTest tries several different flavors of diff(1) before falling back to the standard one. One of these flavors is the mysterious gdiff, which neither exists on my Arch Linux system nor is available in its package repositories. That’s the ticket!

I quickly masqueraded colordiff as gdiff within my user account:

re-ran my failing test, and saw colored diffs in the failure report!

Three years later, in the summer of 2014, I wrote my own gdiff script in Ruby to further enhance the readability of MiniTest’s assert_equal diffs by intelligently combining two complementary approaches of visualizing intra-line differences into a single format:

There are several things happening in the screenshot above:

In addition, this gdiff(1) script goes beyond standard diff(1) to:

Finally, here is the source code of my gdiff(1) script, also available on GitHub, ready for use. Simply download it into your ~/bin directory and happy diffing! :)

Installing the above gdiff script is not enough for Ruby on Rails (which provides its own, plain “expected but was” message for assertion failures) so the following monkeypatch is necessary in your test helper to override Ruby on Rails’ assertion failure messages with MiniTest’s native diffing.

After adding the above snippet to your test/test_helper.rb file, you should now see the forementioned gdiff script being used in Ruby on Rails!

Added a monkeypatch to integrate my ~/bin/gdiff script into Ruby on Rails testing.

Updated my ~/bin/gdiff script to (1) highlight changes in character-wise diffs using reverse video style and (2) be resilient when the diff-highlight script is not available.

Added my own ~/bin/gdiff script, which visualizes differences in MiniTest assertion failures more intelligently than colordiff(1) and even wdiff(1).