This is what you would see if you applied the Zenburn color scheme to Vim running under the TERM=xterm-256color environment inside tmux or GNU screen, which itself was attached to the xterm-256color terminal: 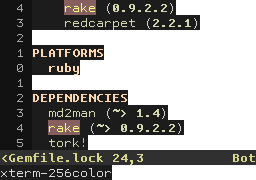 Here, the terminal’s background color bleeds into Vim’s and, depending on the contrast between those two colors, makes Vim use highly unpleasant.

Thankfully, you can fix this by running :set term=screen-256color inside Vim or by relaunching Vim under the TERM=screen-256color environment, as some experts recommend: 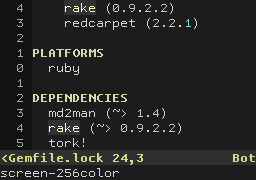 However, if you rely on Vim’s ability to sense modifier keys—such as Shift, Control, and Alt—because you use them to define custom keyboard shortcuts like I do, then you would soon discover that Vim does not recognize some of them inside the screen-256color terminal.

Thus you would be faced with a most unnerving dilemma:

Alas, is it truly a binary choice? Must you really forgo your personal keyboard shortcuts in order to view your chosen Vim color scheme properly? No, I would not accept such a fate; there has to be a better way! >:O

I knew about Vim’s ability to manipulate its host terminal through its t_Co setting, which lets you override how many colors Vim thinks its host terminal is capable of rendering. Thus, looking up :help t_Co in Vim revealed numerous terminal settings—which all happened to be listed in the terminal-options section of Vim’s help documentation—that could be overridden, hopefully in the same way, to perhaps solve this problem.

However, there were too many settings in the documentation to practically investigate by hand, so I narrowed down the possibilities to the following eleven settings by searching for the words “color” and then “clear”:

I then observed the values of these settings in both environments so that I could (1) compare them to discover what makes Vim render its background color correctly in the screen-256color terminal and then (2) replicate those values to achieve the same effect in the xterm-256color terminal.

One by one, I applied the screen-256color value of each differing setting to a Vim session that was running inside my desired xterm-256color terminal and then pressed Control-L to make Vim redraw itself. Changing t_cl and t_me had no effect but, luckily, t_ut did the trick! :-)

This makes sense because, according to Vim documentation, not only does t_ut control whether Vim “uses the current background color” to clear the screen (also known as Background Color Erase, or BCE for short) but it also takes effect only when its value is a non-empty string.

Therefore, the solution is to simply clear Vim’s t_ut value if Vim happens to be running inside any 256-color terminal. You can automate this by adding the following snippet to your Vim configuration file:

Will Gray suggested that we can use Matt Wozniski’s terminalkeys.vim configuration file to teach Vim how to recognize modified Function keys (in addition to Page and Arrow keys) produced by the xterm-256color terminal when Vim runs under the TERM=screen-256color environment.

That configuration file is also available as a standalone Vim plugin for easy installation as a bundle.

Tom Ryder suggested that, rather than overriding the TERM environment variable, we should teach Vim how to recognize modifier keys produced by the xterm-256color terminal, as recommended in the tmux FAQ.

Following his reference to the “How do I make Ctrl-PgUp and Ctrl-PgDn work in vim?” section of the tmux FAQ and combining the instructions therein with this remedy (see step #4) yielded the following configuration snippets:

The above snippet configures tmux to pass modifier keys produced by the xterm-256color terminal down to Vim and also to run Vim under the TERM=screen-256color environment.

The above snippet teaches Vim how to recognize modified Page and Arrow keys (but not Function keys) produced by the xterm-256color terminal when Vim runs under the TERM=screen-256color environment.